Quit leaning on your broom 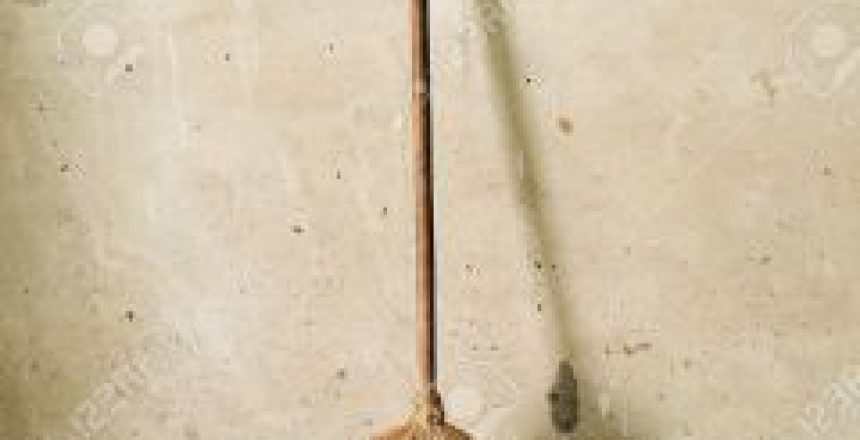 The summer after I married my wife, I really needed a job.  I was now a husband, and did not have any kind of savings account.  I was 19, and had no real skills that I could employ that were particularly valuable.  But, I knew a man that told me, “Hey, you can come work the summer at the plywood mill.”  Sure, that sounds great.  I mean, I know nothing about plywood, but I also have no other offers at this point.  So, off to the plywood plant I went.

It was a hot place.  Not a popular or exciting place, just a really hot place.  This was a plywood factory, in east central Mississippi, in the summer time.  The work involved placing a thick vinyl apron and heavy rubber gloves on for safety.  You know, it kept the jagged edges of the wood from splintering into your body and causing horrendous injuries.  But, it made you even hotter.  I was just about ready to shed the apron and gloves until a fellow worker had a little accident.  He jammed a 6 inch long splinter through his side!  I got it – keep on wearing the apron and the gloves.

Occasionally the machines would stop, due to a jam or a breakdown of some kind.  When that happened it was great – break time, right!?!?!  Sadly, no.  It was time to pick up a broom or some other type of cleaning utensil and begin tidying up the place.  You know, a messy workplace leads to accidents!  So, we all had a designated broom or dustpan or other such implement that we had to grab and get to work.

One day as the line shut down due to some issue, I picked up my broom and started walking around looking for something to clean.  But, on this particular day I was tired.  It was the middle of the day, it was 105 degrees, and I was feeling mighty slow.  I was just ready to go find a cool, quiet corner somewhere and pass out for a bit.  Of course, it was always when the machines stopped that the boss started walking around looking to see what everyone was doing.  He knew this was a tough time to stay occupied, and he wanted everyone to keep busy so that no problems started among the crew.

So instead of just quitting, I used my broom as a handy little prop.  I held onto it, while also leaning a little into the broom.  Me and that broom made a little agreement.  I will push on you and you push back on me.  Voila!  I had a little arrangement.  I could stand, with my broom, and just relax a little while things were slower.  I would only rest a minute.

We had a funny guy that worked there.  He was loud and often inappropriate, but could also be quite the card.  He saw what I was doing, and knew about the little game that I was playing.  He walked over to me quietly, and then doing a very authentic boss voice, said, “Hey Brumfield, you better quit leaning on that broom!”

Well, the broom hastily ceased it’s agreement with me.  I fell one direction and the broom another, and 4 guys started laughing like crazy.  I was horrified, humiliated, and no longer sleepy in the least bit.  I now felt like the joke around there.  But, the guys made it better.  They only told EVERYONE that worked there for the rest of the day.  I have never forgotten how that day made me feel.

Later, an older man that worked there came over to me and did help me out quite a bit.  He leaned over to me, like he was about to reveal some great truth hidden from the rest of mankind, and said, “You better get busy looking busy.  Don’t pay attention to those guys.  If they were busy, they wouldn’t have had time to mess with you.”

Lesson learned.  Actually a really important lesson, much like one taught in God’s word.  Now, it doesn’t say, “Don’t lean on your broom.”  But, it does direct us to consider an important truth – Busy people are better at unity.

Ephesians 4 is the chapter with that famous idea, “keep the unity of the Spirit through the bond of peace”, verse 3.  This is a great notion, and one that we need today so much in our churches.  We need to find the way to keep our unity, through our peace.  But, how do we actually do that?!?!?

Paul goes on to explain that the church is actually ONE – “There is one body and one Spirit – just as you were called to one hope when you were called – one Lord, one faith, one baptism;”, verses 4-5.  So, we were not called to be many, we were called to be ONE.  We are to work together and love each other, and sympathize, and care about each other.  We know all of these things.  These are basic Christian virtues.  Why do we have such a hard time doing this?!?!?

Well, because often we have stopped working and are leaning on our broom.  We then find someone else leaning on their broom and so we entertain ourselves by messing with them.  But, what is clear, is that while we are not working, we are leaving room for the enemy and we are NOT keeping “the unity of the Spirit through the bond of peace.”

Paul goes on to tell them that they all have different jobs, but that they all need to be using their gifts and abilities so that “the body of Christ may be built up”, verse 12.  Whatever your ability, use it to work in God’s service, in His kingdom, for the good of the body.  This helps us all to “become mature”, verse 13.  Maturity is an important goal for the Christian, because God expects us to grow.

So, what if we do not work as we should?  Well it leaves us time for gossip, slandering, jealousy, envy, pride, and many of the other negatives that tear down the Christian and the church.  These behaviors also do not lead to maturity, they lead towards sin, immaturity, and regression in our spiritual lives.  It also produces dis-unity, division, and great harm to many.  I have experienced that the people that complain and whine the most are the folks that are also working the least.  Coincidence?

Are we leaning on our broom?  Do we talk about all the work that someone should be doing while we are simply “propped up” as I was on my broom?

Well, our boss (Christ) has all of our spiritual growth and maturity in mind.  He loves us and demands that we grow and use our gifts in His service.

Here He comes… better pick up that broom!